If you are having trouble using the system, please try our help guide.

(21) Part One - Characteristics of the Plan Area 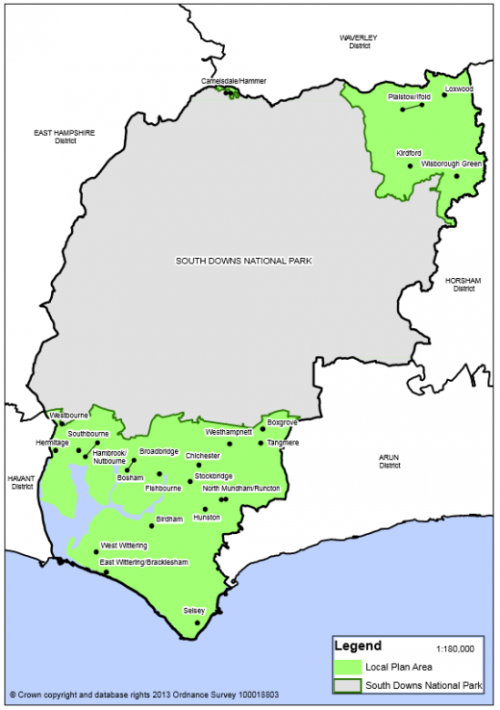 Characteristics of the Plan Area – A Spatial Portrait([1])

2.1 Chichester District covers an area of almost 800 km2, stretching from the south coast to the southern border of Waverley and East Hampshire in the north; and from Havant in the west to Arun and Horsham in the east. Over two-thirds of the district lies within the South Downs National Park. There are 33 parish councils located within the local plan area, including six parishes which are also partly located within the South Downs National Park.

2.2 The plan area is split in to three areas, each with different characteristics, landscapes and access to services:

2.3 The cathedral city of Chichester is the main settlement with a population of around 28,500([2]), and is the main location for the provision of higher education and shopping facilities. The city is renowned for its cathedral, its historic heritage and university and is the largest centre of employment in the plan area.

2.4 Outside of Chichester City, the plan area has four other significant settlements that accommodate a range of facilities and services:
2.5 The A27 runs east-west through the plan area, connecting the area to Portsmouth and Southampton to the west, and eastwards to Worthing, Brighton and Eastbourne. There are also rail links along the south coast and to London from Chichester City. North-south transport links are comparatively poorer in quality, and rural communities in the North of the plan area are fairly isolated.

2.8 By 2035, those of working age are expected to account for only half of Chichester District's total population([4]), whilst the number of people aged 65 and over is expected to account for 35%. An ageing population of this scale presents challenges for health and caring services, particularly in rural areas where access to transport, services and everyday activities is difficult. It also presents challenges in terms of service provision, particularly for high cost intensive services such as those related to primary health care.

2.9 The special qualities of the area offer a good quality of life, which creates a high demand for housing. This demand has caused a widening gulf between local incomes and house prices([5]). Whilst this affordability gap can be addressed in part by economic processes, the need to provide affordable housing remains a priority for the Council. There is a lack of opportunity for young people to move in to, or remain in, the plan area because the housing stock is dominated by larger, more expensive properties, especially in relation to other parts of Coastal West Sussex and Hampshire. The amount of detached housing is above average, in particular outside of Chichester City.

2.11 Residents of the district have a good life expectancy, for males, this is 81.1 years and 85 years for females. This is in line with South East averages and slightly higher than the national averages([6]).

2.12 The 2011 Census found that 15.61% of Chichester's households did not have access to a car or van; this is lower than county, regional and national averages.

2.13 The largest employment sectors in the plan area are retail, public administration (due to the presence of the District and County Councils in Chichester City), education (in particular the University of Chichester and Chichester College), horticulture and health. Higher value jobs which provide an opportunity to improve the productivity of the local economy are focused on advanced manufacturing and engineering; construction and civil engineering; and finance, insurance and business services.

2.14 An objective of the Council is to foster a qualified and highly skilled workforce by improving opportunities for unemployed persons; working with the third sector and community based organisations; and supporting stronger links between the University, the College and businesses.

2.15 The University of Chichester has two campuses; one in Chichester and the other in Bognor Regis (within Arun District). The University makes a valuable contribution as an educational institution and employer, and helps brand Chichester as a 'university city'. It is one of the largest employers in the city, providing around 1,000 jobs (direct and indirect) and contributing over £109m to the local economy(6). It has some 4,600 full-time students plus 1,000 part-time students, with approximately 80 EU/international students([7]). The University is a top performer in terms of employability and retention rates, with nearly 93% of its students employed or in further study six months after graduating([8]).

2.18 There are a few large employers in the plan area (employing over 250 staff), particularly in Chichester City, but in general the local economy is based around micro (employing up to 9 staff), and small (employing between 10 and 50 staff) to medium (employing between 50-250 staff) sized businesses with high levels of self-employment. The majority of existing employment and business space is focused around Chichester City and the A27 corridor. This area benefits from good access to the main road and rail network and offers the best potential for attracting inward investment. However, there is also a need to support and diversify economic activity in the rural parts of the plan area, particularly on the Manhood Peninsula.

2.19 The employment rate of 16-64 year olds is slightly higher than the national average of 74.4% at 79.2%, however the proportion of people in part time employment is above both South East and National averages(6).

2.20 Due to the combination of climate, soil quality and high light levels which prolong the growing season, the district's horticultural industry is amongst the largest producer of salad crops in the country and supplies much of the South East region. Major growers have established large scale glasshouse sites, which are mainly concentrated on the Manhood Peninsula and along the East-West Corridor. In the Chichester and Arun coastal plain, horticultural production has a retail value of over £1 billion and employs over 7,500 permanent and seasonal workers([9]).

2.21 The visitor economy, including hotels, catering, campsites and other tourist facilities, is a significant employment sector. The district's scenic beauty, beaches, heritage sites, arts and crafts, festivals, museums and galleries and organisations in film, photography and new media, all have the quality and capacity to attract significant levels of visitors. Chichester Festival Theatre is the most influential regional theatre in Britain. It brings over £13 million into the local economy, through primary and secondary spend by the theatre and its summer season audience([10]). Outside of the city there are a number of other heritage attractions and events such as Goodwood, which also bring in visitors and generate income.

2.22 Chichester District has a rich and varied natural, historic and built environment, stretching from the lowland marsh and creeks associated with Chichester Harbour and Pagham Harbour, across the coastal plain to the South Downs National Park, and the Weald further north.

2.23 In the North of the plan area, the "Low Weald" landscape is characterised by a mix of pasture and medium to small scale arable fields. Further south, the Downland footslopes feature semi-open, large scale, arable fields and paddocks. The extensive coastline, which forms the southern border of the plan area, varies in character, with shingle ridges, sandy beaches, and a variety of wetlands, salt marsh and harbours, including the Chichester Harbour Area of Outstanding Natural Beauty. The coastal and harbour areas are important for biodiversity, recreation and tourism.

2.24 The plan area has internationally designated habitats: Special Protection Areas, Special Areas of Conservation, and Ramsar sites and nationally designated Sites of Special Scientific Interest. There are also various local designations for biodiversity, heritage and landscape, such as Sites of Nature Conservation Importance, and National and Local Nature Reserves, as well as a number of Regionally Important Geological/Geomorphological sites – a local designation to protect geology.

2.25 The UK's largest exposed-coast Managed Realignment Scheme is at Medmerry in the low-lying coastal plain between Selsey and Bracklesham. The scheme is managed by the RSPB as compensatory habitat for losses elsewhere in the Solent, and is internationally protected along with Chichester and Langstone Harbours and Pagham Harbour, which together provide one of the largest protected wetland sites in the UK.

2.26 Former gravel pits, canals, river corridors and ponds are also important wildlife habitats as well as a resource for leisure and recreation.

2.27 The district is distinctive by virtue of the very high quality and value of its historic environment which play an important role in defining the character of the area. In addition to statutorily designated areas, there is a rich and diverse heritage of townscapes and landscapes. The key features of Chichester's historic environment are outlined below:

2.28 The historic buildings and sites within the district are finite resources. A key issue is their management and protection to ensure their importance and value is retained, whilst recognising the need to accommodate new development([11]).

2.29 This Plan faces a number of important challenges. To address these, it needs to:

If you are having trouble using the system, please try our help guide.
back to top back to top